The plan was to drive east from Constitución over the mountains to the east coast of Baja Sur and end at a Bahia Coyote. It was almost totally on dirt roads. We planned to stop and tour two missions that were in the mountains. It was a 2 hour drive to San Luis Gonzaga Mission. It was built in 1761 and is still in use today. There were a lot of large buildings around the mission that also looked very old, but were abandoned or in ruins. At one point there must have been a larger population in the area. The current town of San Luis Gonzaga looked like about 8-10 houses. There were two large schools, so it appears they pull students from all the ranches in the area. 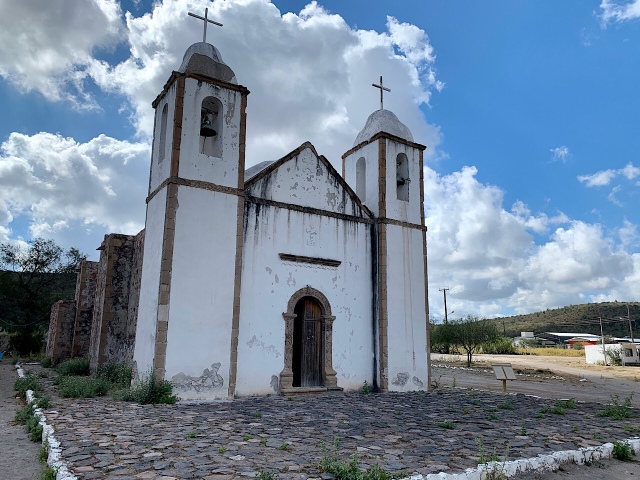 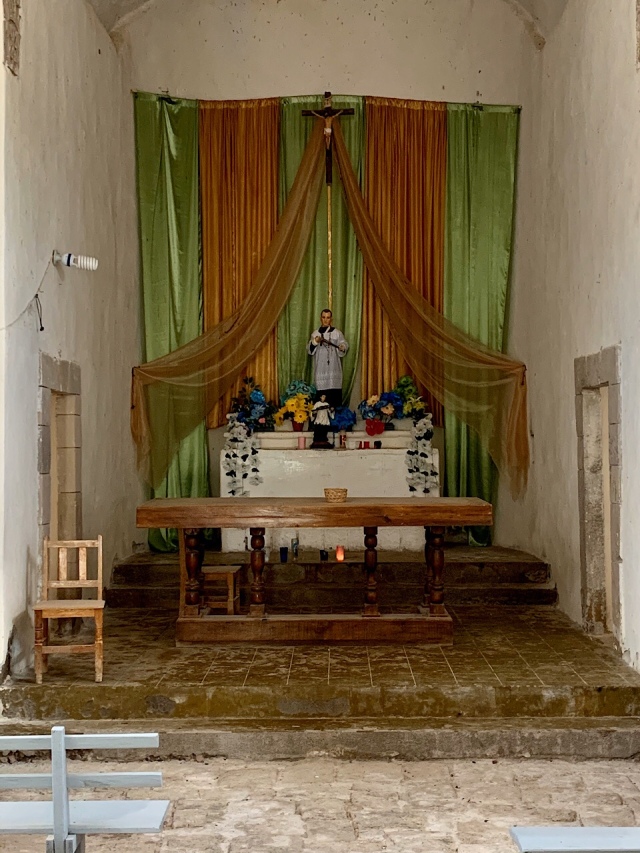 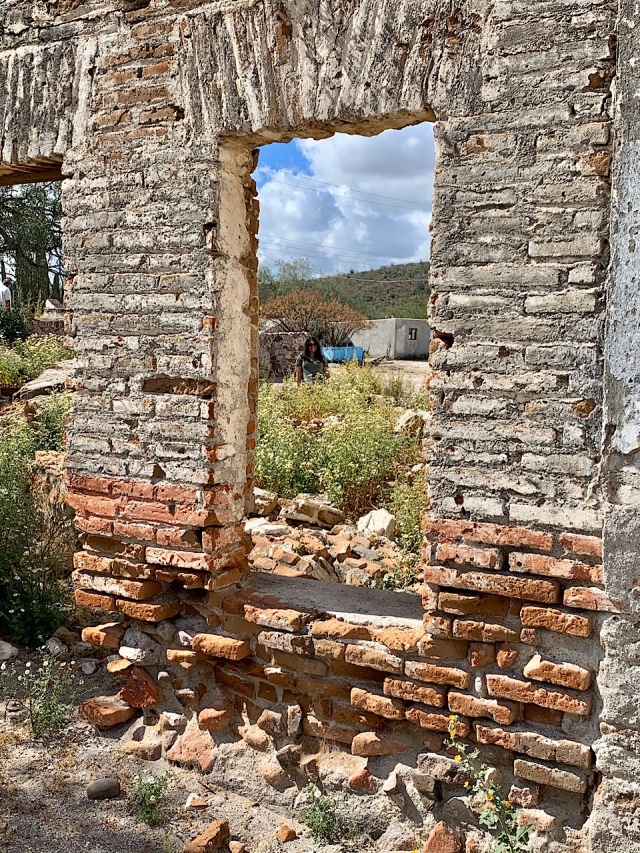 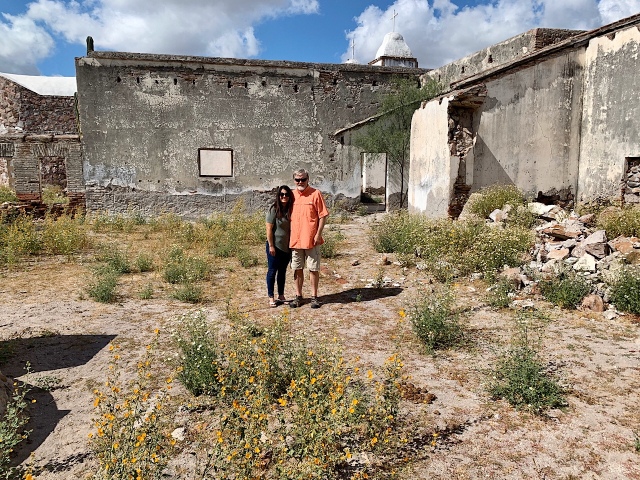 We continued down the road looking for Mission de Passion. It was just the ruins of the mission buildings, but we could not find it along the road. We had the GPS coordinates (24.8875399, -111.0305679), so we knew we were close. We had passed the point and were turning around on the road when a rancher came out and waved us down and wanted to know if we wanted to see the ruins. He was yelling across the arroyo and Eva was yelling back. We finally figured out that the ruins were on his property and he wanted to show them to us.

We backtracked to the entrance of his ranch and parked near his house. The ranch is an oasis in the desert. Maximo Amador raises 120 goats on his 7-1/2 acre ranch. He lives there with his wife Maria, son Javier and daughter-in-law Sandra. His mama, Teresa and nephew, Vicente were also visiting the ranch that day. 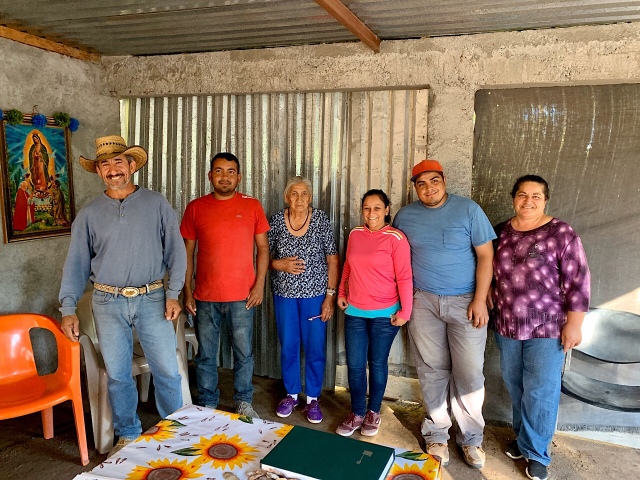 Maximo was raised about 20 km from his current ranch, but his wife was from the area, so they bought the ranch and moved there. The ruins of the mission were right under his goat pasture and ranch land. He walked us around and told us about the Mission de Passion that was founded around 400 years ago. When he started the ranch he knew the ruins were there, but didn’t know anything about them. However, for the past 11 years professors from the University of Utah would bring a group of students down for a month to study the ruins and surrounding area. We think it was a combination of archeology, anthropology and biology students. They came to study the ruins of the mission and how the people lived there. 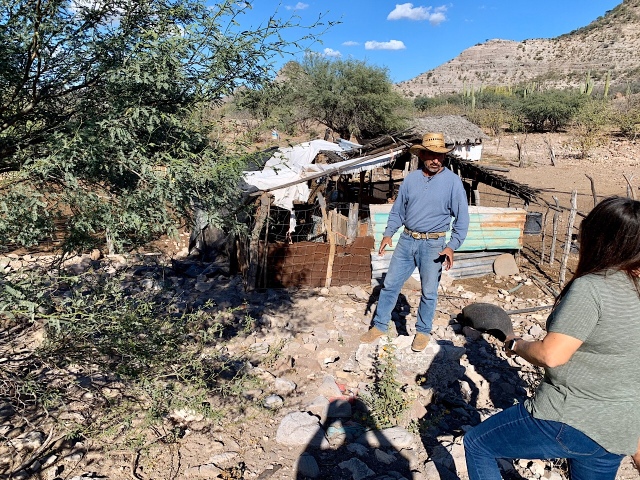 Maximo has learned a lot about the mission from the professors, so he gave us quite a tour. They think there were over 800 people in the area. There were many ruins of the large churches and smaller buildings. Most of the ruins are just the foundation, or a short rock wall. However, they think much of the buildings are still underground. The missionaries served the indigenous Indians in the area. From what we could see of the local area, they had a large areas for crops. There is a small river running through, so they had plenty of water. Maximo had a solar powered pump that would pump water from the river into a cistern. From there he had 2” plastic pipe to distribute the water. 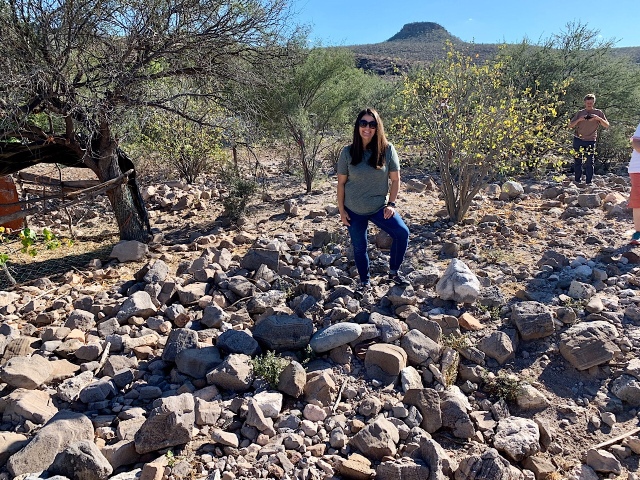 After the tour we walked to Maximo’s house and sat on the patio. He showed us the dozens of arrowheads that his son found in the area. He also showed us some of the documentation that the U of U professors had left with him. Of course Eva was the translator for all the Spanish discussions. Maximo and his family were very nice and accommodating. We asked if we could camp in the area and he wanted us to camp in his yard, but we thought it would be best to be down by the river, just below the house. He wants us to share about the ruins so more tourists will come. If more tourist come to the area the government will invest more into the roads and infrastructure. He said only 10-12 tourist come each year to see the mission. He had us sign our names and where we were from into a book that documents the visitors. We were the first ones to sign the book. They have a Facebook page named Rancho La Capilla (Chapel Ranch), so we will share that page, and also add a POI in iOverlander. 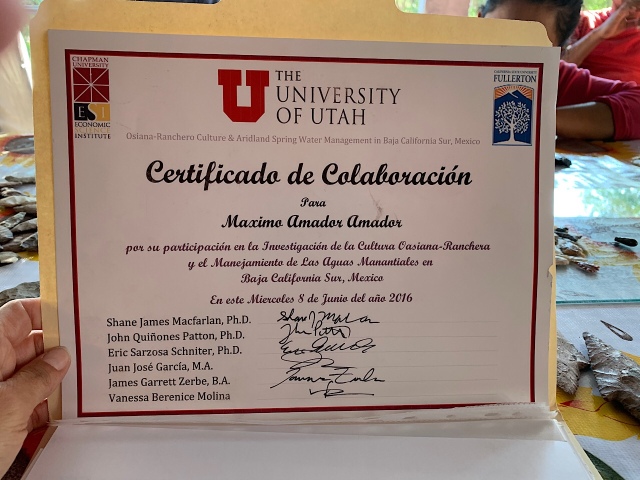 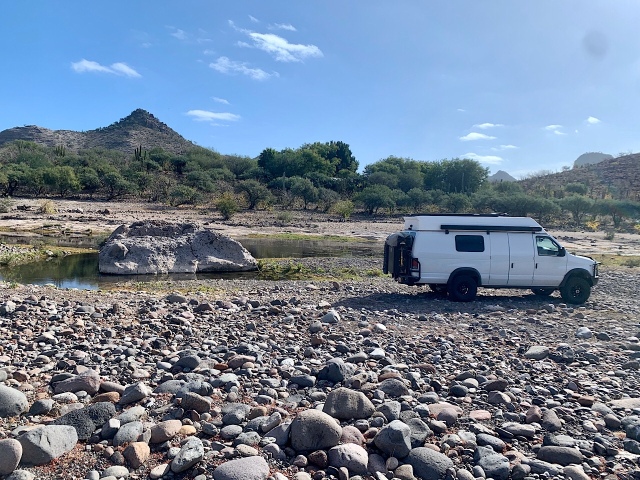 It was a pretty warm day today, but when the sun went down it got cold quick. After setting up camp we had a campfire under the trees.

In the morning Maximo came by and talked to Eva for a while. He was telling her about his property and said if we wanted to move in the area he could help us get some property. I haven’t talked Eva into moving yet, I will have to keep working on it. It is a very beautiful oasis in the desert. It was also very calm and quiet. We also saw some vaqueros riding their horses through the area herding their goats. 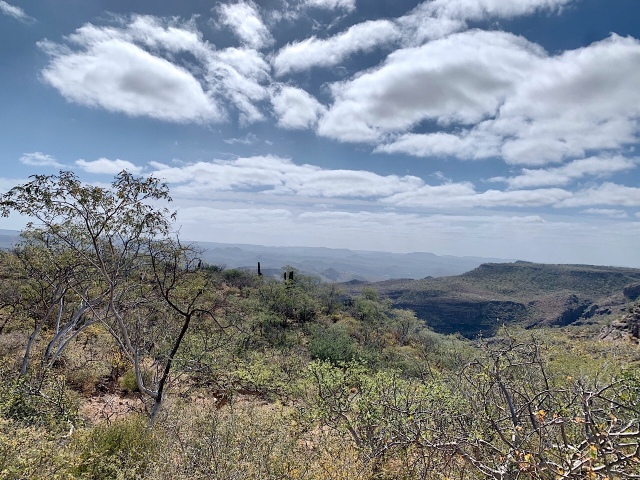 We hit the road around 10:30 am to drive to the east coast of Baja to the village of San Evaristo. The road took us up over the backbone of Baja, where on one side the drainage is the Pacific Ocean and the other side is the Gulf of California. I think the elevation was around 1800’ above sea level. This road was the roughest, steepest road we have been on. It was continual rocks, steps and loose rubble. There were very few spots where we could get above 15-20 mph. The road from the Mission de Passion to San Evaristo was about 20 miles, but it took us 5-1/2 hours to drive there with only a few stops. We did stop for about 1/2 hour and walked a couple hundred yards to a waterfall. 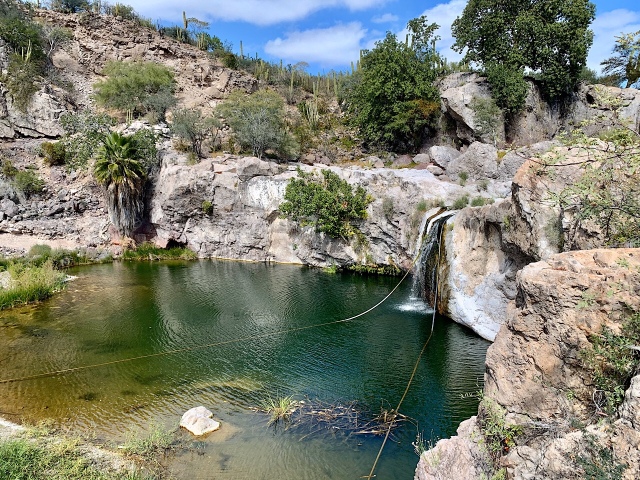 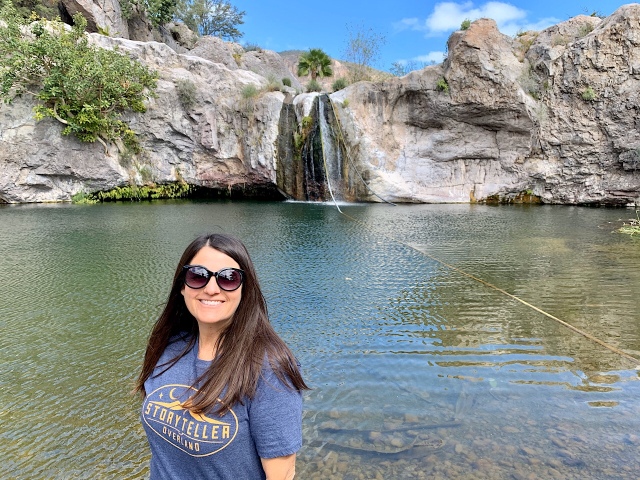 We arrived in San Evaristo at 4 pm. It is a small fishing village that has a very protected bay. However the bay is surrounded by all the houses. It made it difficult to find a good camping spot. There were also several sailboats anchored in the bay. There was one restaurant called Maggie May. We drove to Maggie May, but the owner had gone to the store, so we couldn’t get anything to eat. After driving down to the beach and looking around we decided not to camp here, but drive further south towards La Paz. It was a little to crowded. We drove another 7 km to Las Dunas bay. The road was a little better than the road into San Evaristo, so we arrived at 5 pm.

Las Dunas is a small bay that has a nice sandy beach with a rock outcropping that extends into the sea and provides some protection from the waves. There was enough room for all of us to camp so we decided to stay for a few days. However, it got dark not long after setting up camp, so everyone just stayed in their camp for the evening. I think everyone was drained from the past two days of driving. 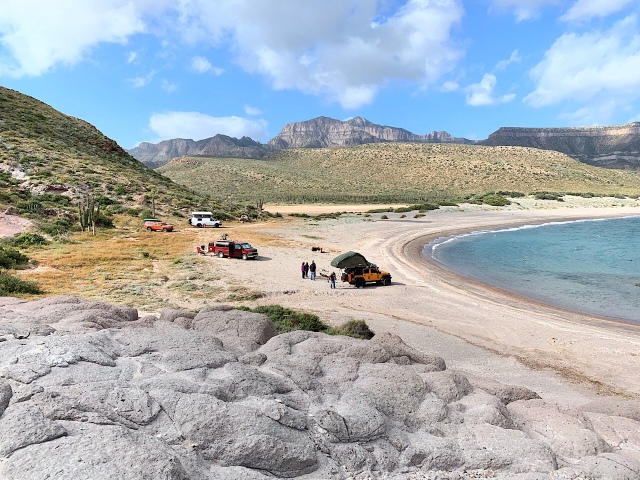