It was windy in the morning with the wind blowing from the north, so we decided to pack up and drive 2 km to La Bahia de los Colores. This bay was on the other side of the mountain just south of us, so we thought there would be protection from the wind. 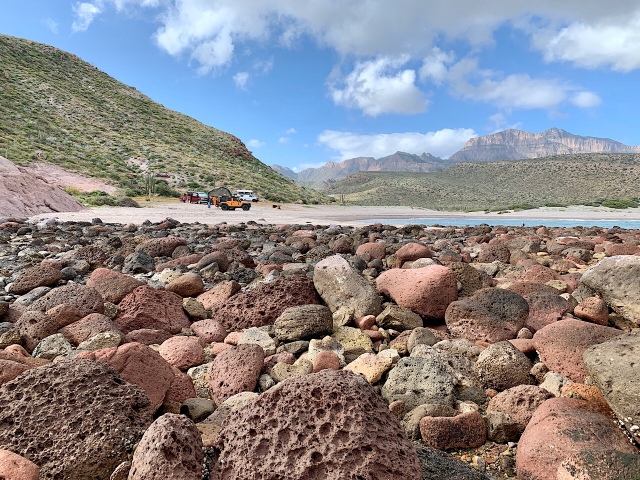 La Bahia de los Colores translates to The Bay of the Colors. It is named for the colorful rocks and cliffs that surround the sandy beach. The road in from the main road is rough with a lot of loose boulders and rocks, but it was not steep. It took a while to drive in, but once we were on the beach, there was soft sand. We found a camp back near some bushes to help protect us from the wind. This bay was much less windy than Las Dunas, so it was a better place to camp. When we hiked around the point of the bay the wind was just howling and cold. 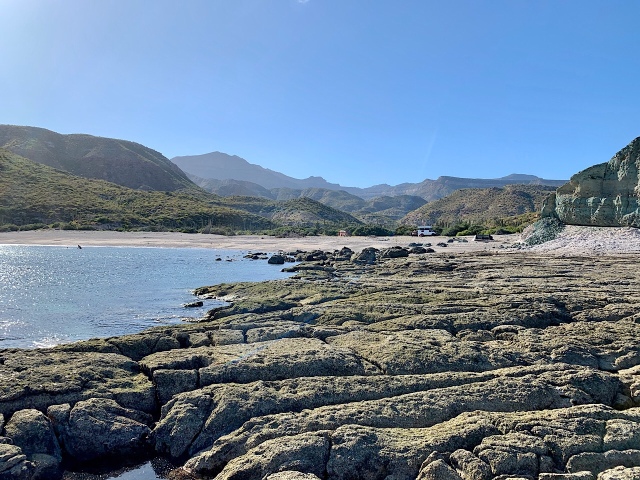 When we arrived at the beach there was a single tent and a couple of kayaks on the beach. We met Elizabeth (Victoria, BC) and Freya (Germany) who were kayaking north up the coast. We only talked to Elizabeth as Freya was pretty quiet and reserved. Freya is a famous kayaker (freyahoffmeister.com) who is on a multi-year quest to kayak circumnavigate North America. She has already kayaked around Australia and South America. Last summer she kayaked from Washington to somewhere in Alaska, until it got too cold. She left her kayaks there and went back to Germany for a while. Then at some point she had kayaked from Washington, south around the Baja Peninsula to La Paz. She started the leg of the trip in La Paz 5 days ago. She will work her way around Mexico until summer when she will fly back to Alaska to continue north. Freya has 2 custom sea kayaks that she uses and gets a companion to paddle with her for a month at a time. Elizabeth had just joined her in La Paz. We heard this story from Elizabeth who had come to our campfire to burn her trash. Freya was in their tent working on her blog. She has a satellite phone to get weather reports and update the blog. Her paddling partner does the cooking and cleaning. 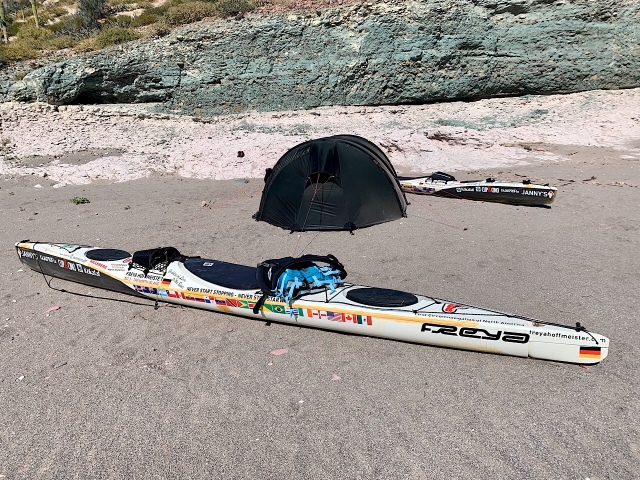 In the afternoon we hiked around the rocks and saw a few fish, but a lot of sea urchins. Apparently you can eat sea urchins, but no one wanted to try. It was to windy out of our protected cove, so we didn’t hike far. 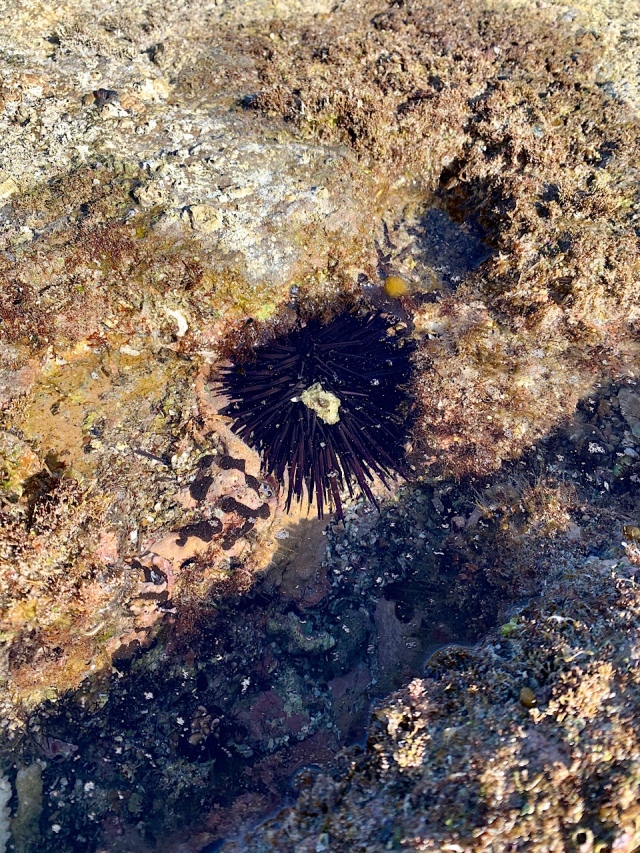 A few days ago I hurt my back moving some large water containers. It did not hurt much the first day, but it really started hurting today. It was a windy day so I thought I would take it easy and I spent most of the day in the van laying on my back. That did not help much and by the end of the day I was hurting pretty bad. The last two nights have been miserable as it is very painful for me to climb into the bed.

We decided to drive to La Paz, ahead of the others, and see a physical therapist. We also said goodbye to Jeff and Wendy as the were staying in southern Baja for several more weeks. It took over 3 hours to make the drive. The first hour was pretty rough roads, it then turned into just a washboard gravel road and then the final 40 km was paved. While we were on the rough dirt road we passed a guy with a Jeep and teardrop trailer. We stopped to talk and found out I had met him while driving the White Rim Trail last October. He remember my van. 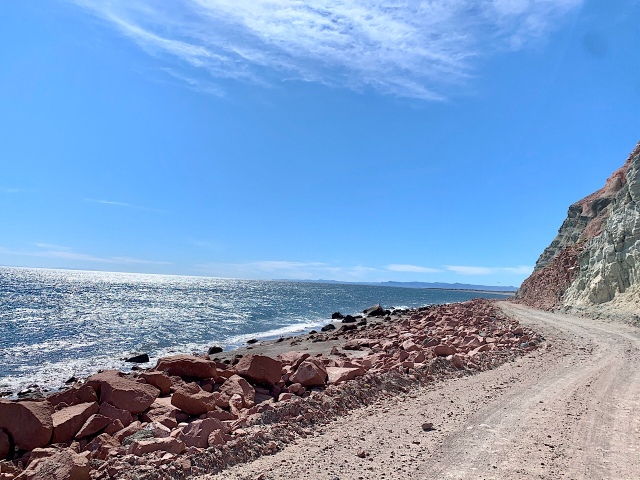 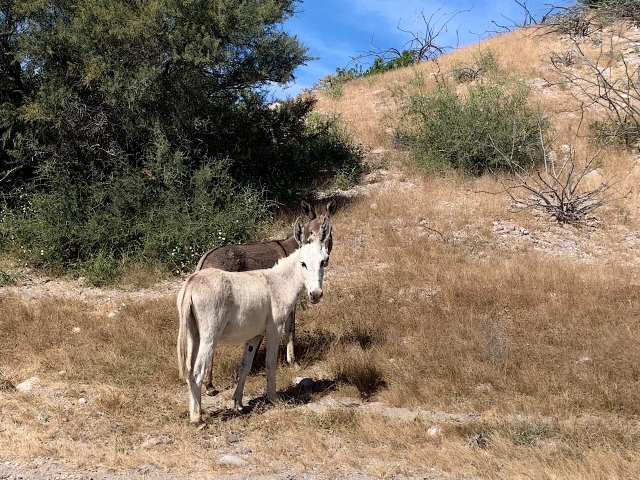 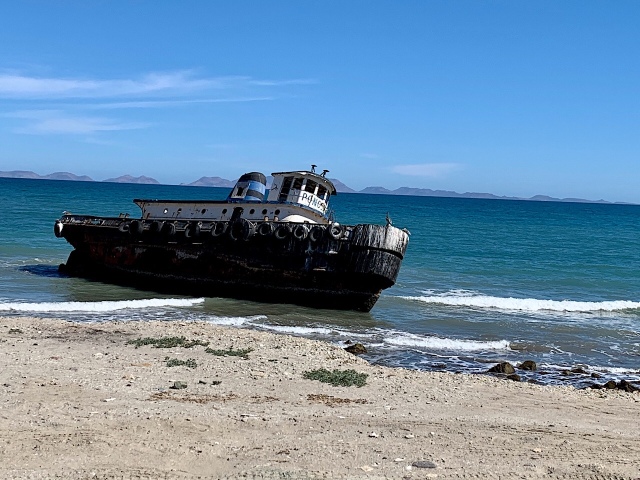 We arrived in La Paz and after gassing up, we went looking for a physical therapist. There was only one that was open during siesta time so we drove to their office and found out they had moved, so we had to drive further into town to find the new location. They didn’t have any time today so I made an appointment for tomorrow morning at 10 am. The office was in the downtown area, only 1 block of the waterfront boardwalk. We found a B&B just 3 blocks away from the clinic. It is very nice inside and only cost $1000 pesos ($53 USD). After checking in we walked down to the waterfront and took some pictures. We video chatted with all the kids on the Facebook app. Later we ate dinner at a small sidewalk restaurant. After driving and walking all day, my back did not feel too bad, but it was still hurting. 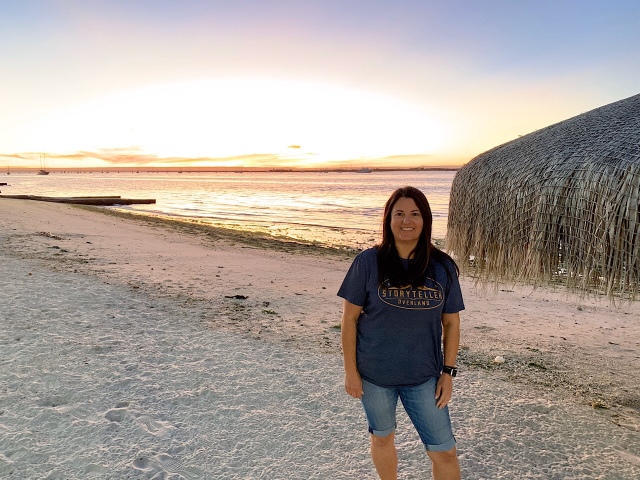 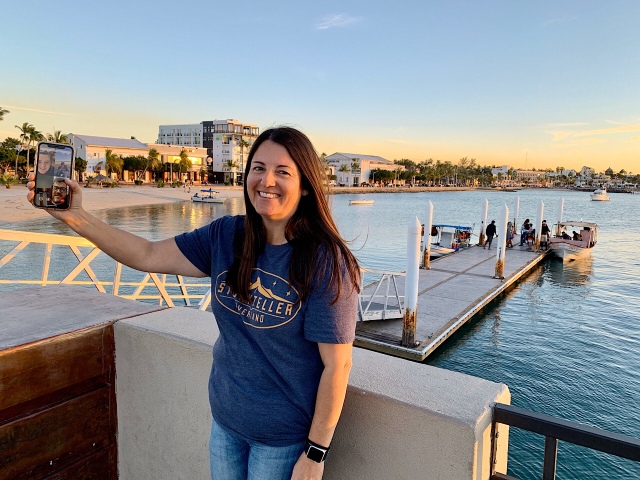 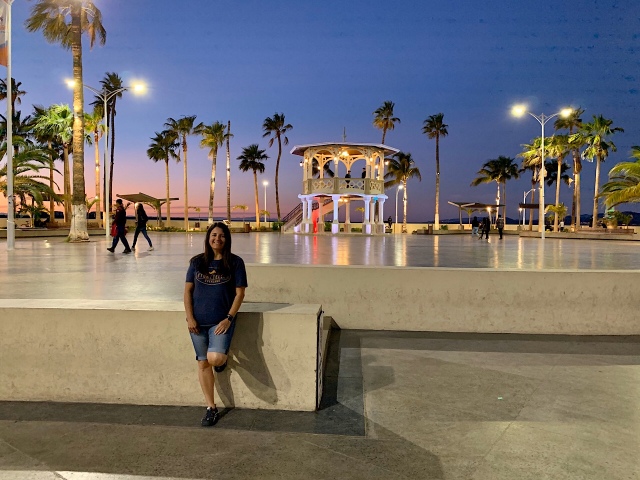 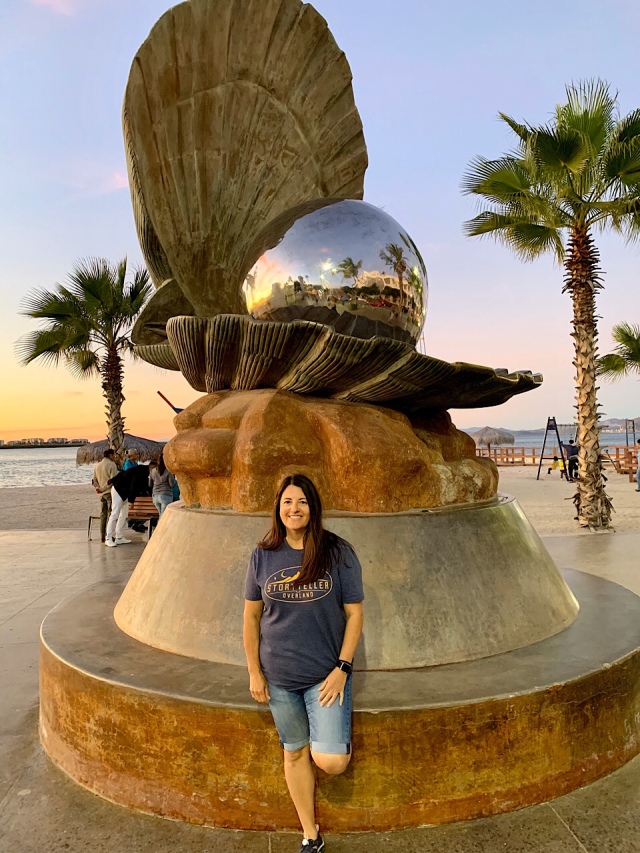 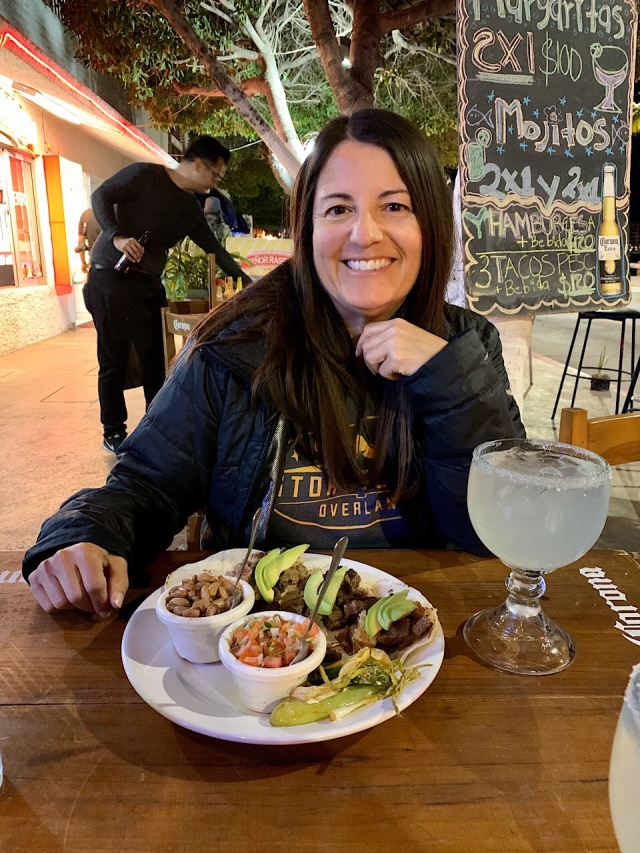