This is the story of my White Rim Trail adventure. We had planned this trip since June, when we stayed awake until mid-night for 3 nights in a row to reserve the three campsites. However, Eva hurt her back a few days before, so she stayed home and I went on my own for this trip.

The White Rim Trail is a 100 mile trail that circles the Island in the Sky section of Canyonlands National Park. The name comes from the white colored rimstone that is above the many canyons that lead down to the Colorado or Green River. It seems like 3 days is a lot for only 100 miles, but it took us that long to complete.

A few weeks before I put out an invite on the Sportsmobile online forum, to see if anyone was interested in traveling with us. A gentleman from Modesto, CA contacted me and wanted to come along. His name is Terry. He is a former methodist pastor, but retired as a financial planner just a few months ago. He was a real nice guy and it was good to talk to and hear of his experiences.

I left home at 7 am, but stopped in Price to buy a couple of cans of beef stew. I stopped for gas in Green River and arrived at the Canyonlands Visitor Center around 11:30 am. Terry was waiting at the visitor center.

We hit the trail around 12:30 pm. The first step was down the Shaffer Switchbacks.

The next stops were at the Gooseneck Overlook and Mussleman Arch. We made it to our first night’s camp at the Airport B site around 4 pm. It was a nice site, just below the Airport Tower formation. It was nice and flat with plenty of space to park the vans. 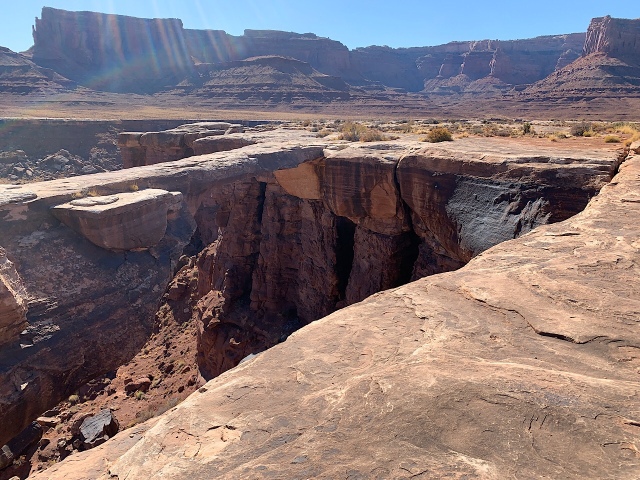 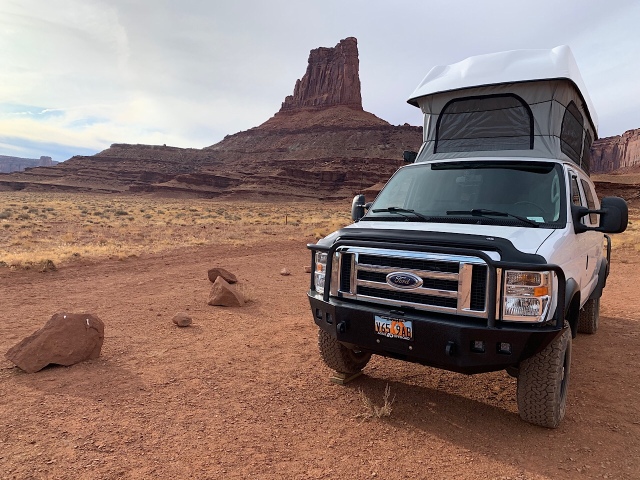 The weather was pretty good, but once the sun went down it got cold fast. Once it got cold, we went to our vans for the evening. I had beef stew for dinner and read the rest of the evening. The low that night was around 35 deg, but the forecast was for an arctic cold front coming for the next few days.

I was up around 7:30 and started the heater to warm the van. I ate oatmeal for breakfast. After breakfast, Terry came over and we sat in our van and talked for while. We left camp at 10:30 am and continued down the trail. 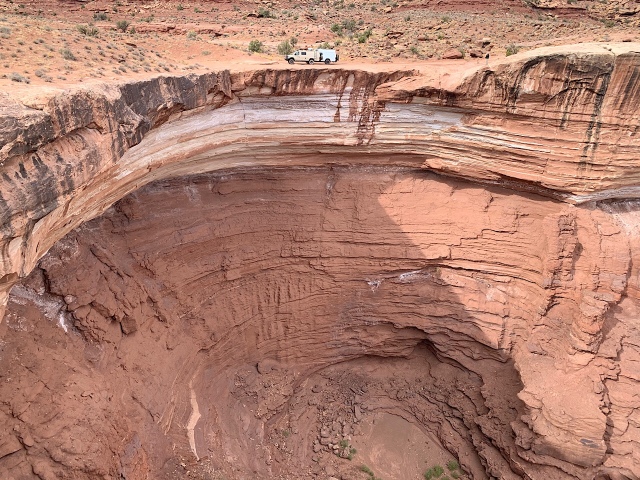 We planned ~25 miles of driving to the next camp. Most of the trail was pretty easy, but very rough. This kept us from going more that 5-10 mph. Every so often, there was a more difficult obstacle that require a little more care on getting through it. I finally put the van into 4WD for a few spots and also lowered the air pressure in the tires (45 front, 60 rear).

We passed by several canyons and stopped for pictures. Monument Basin was particularly beautiful, with many interesting formations. Each canyon was enough different that I wanted to stop at all of them, but there was not enough time.

We went down the side trail to the White Crack campground. This campground is approximately 1/2 way through the trail from the top of the Shaffer switchbacks to the top of the Mineral Bottom switchback. The campground had a nice view and was near the historic road that was blasted through the White Rim capstone. There is only a hiking trail now, but this is what gives the campground its name. By that time the cold front had arrived and it was overcast, windy and cold.

We continued north west on the trail, but it was pretty windy and cold. We made a few more stops and finally arrived at Murphy’s Hogback. This is one of the two major climbs on the trail. The first “S” turn was a little challenging, but we made it through okay. After a short flat section, the main climb began. It was steep with a couple of large rocks to climb. There were a few narrow spots, but nothing that had me worried. With the van in 4WD Low, I just climbed the hill. Coming over the top was a bit of a worry as you could not see the road in front of you. My biggest worry was someone coming down while we were going up.

At the top of the butte was the Murphy campground. We had the A campground, which was on the edge of the cliff and had nice views. It was the best site we saw. However, it was still overcast, and the wind was really blowing. We walked around and took a few pictures, but we were in our vans by 6 pm. I had beef stew again and read until I went to sleep. That night it got pretty cold and was windy most of the night. I was cold, but mostly just my head, because I forgot to wear my beanie to bed. At 7:30 am it was 12 degree outside and 30 degrees in. But the wind wasn’t blowing and the sun was out, so it was not too bad. 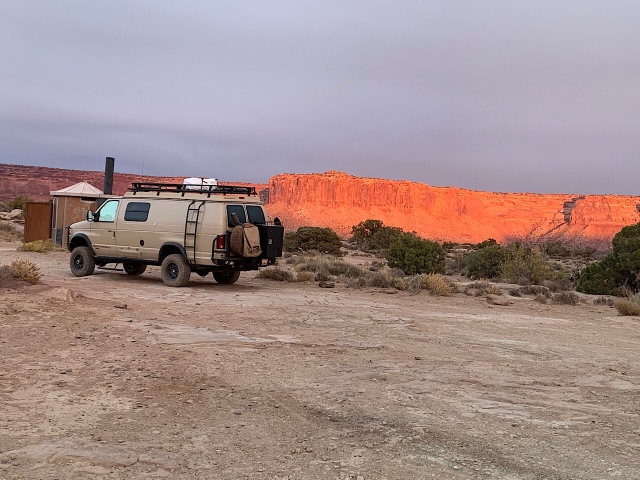 We left camp at 9 am and the first challenge was driving down Murphy’s Hogback. This was about as steep as the uphill, but had more turns and switch backs. I just put in 4WD Low and crawled down. 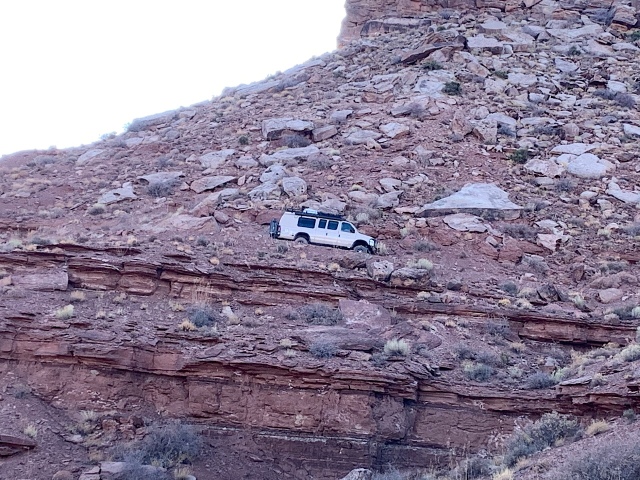 We stopped at the Black Crack. This was on a cliff overlooking the Green River. The crack was 1700 feet long and only 1-2 feet wide. It was deep enough that you couldn’t see the bottom, after dropping a rock, I would guess 50-75 feet deep. 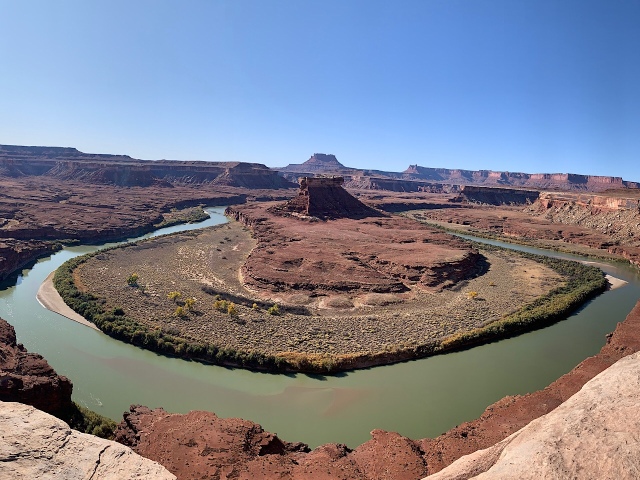 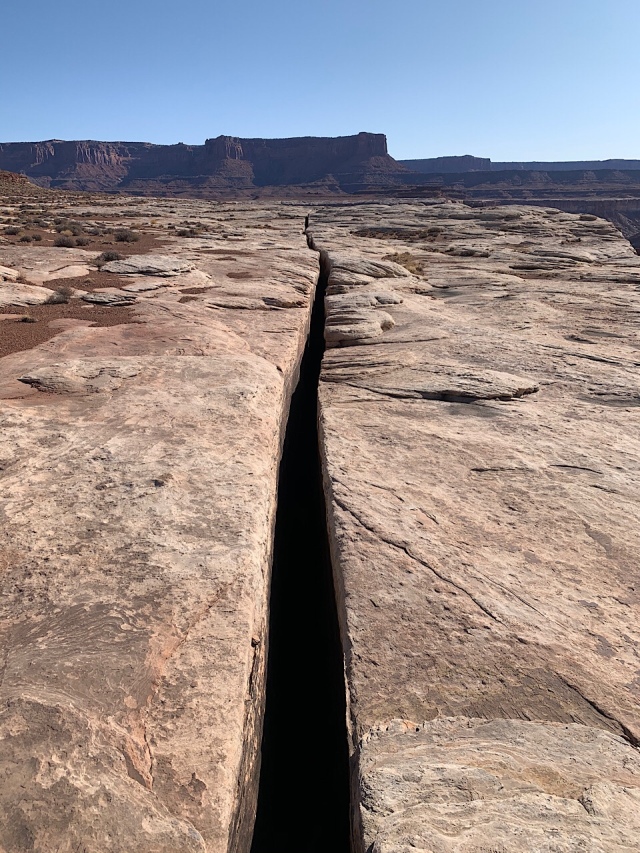 The next stop was Holman slot canyon. The canyon is short, but we climbed down a ways. 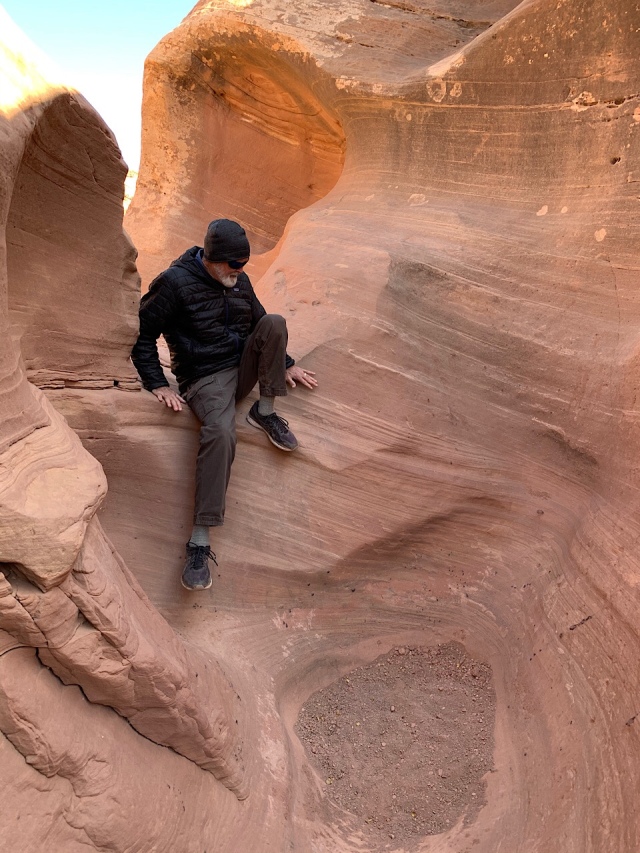 At this point we were down to just above the Green River. We stopped at the Beaver Bottom Cowboy camp, but could not find the inscriptions. A mile more down the road was the Potato Bottom Cowboy camp. In an alcove just above the river was an old wooden chest that is over 100 years old. All that remains are some pieces of wood and the metal straps, hinges and clasp.

The final big obstacle was Hard Scrabble. This was a climb over a ridge. It was steep with a few tight corners, but overall, not too bad. We climbed up with no problems. 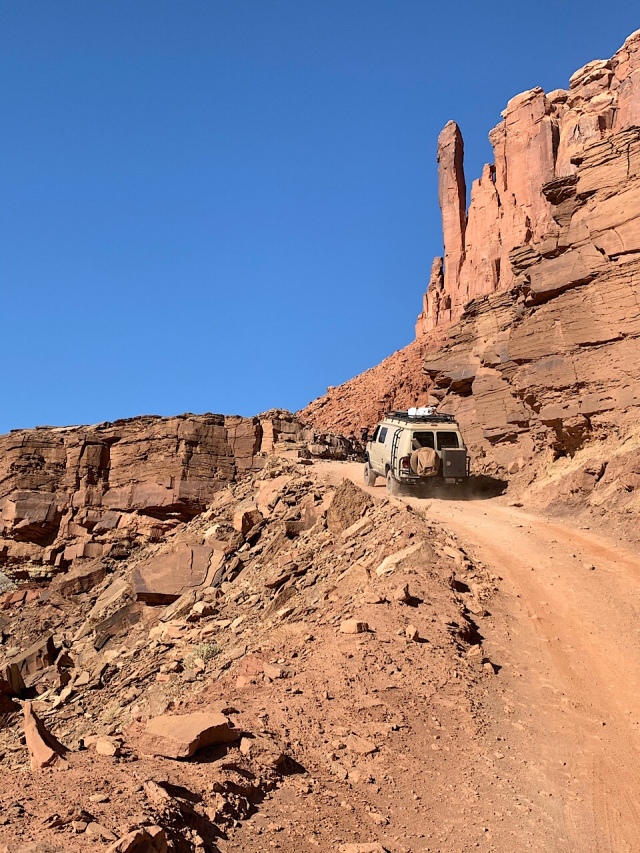 Just past the top of Hard Scrabble we stopped at the Fort Bottoms Ruin hike. This was a 2 mile hike out and back to a 700 year old stone tower, built on a peninsula above a sweeping curve of the Green River. It was a good hike and and a chance to stretch our legs. 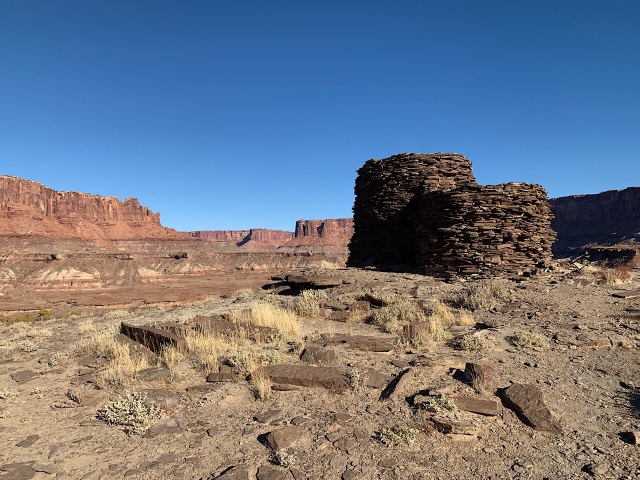 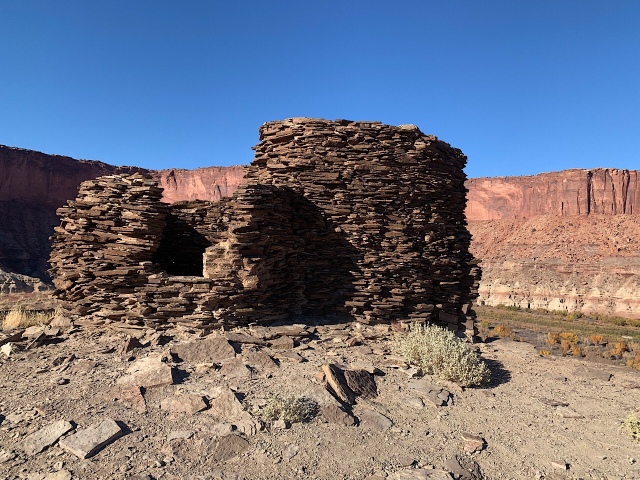 After Hard Scrabble the road was much better. However, there were still challenging spots that required 4WD low to climb or drop off a ledge or rock.

We arrive at our campsite at Labyrinth B around 5:30 pm. The sun was already behind the cliffs, so it was getting cold. The campsite is just above the Green River and a very nice site. It would be a great spot to sit on a cool summer evening and enjoy the views. However, with the sun down, it was already cold. We were back in the vans by 6:30 pm. I cooked grilled ham and cheese sandwiches.

We left camp at 9 am and drove the few miles along the river to Mineral Bottoms. We stopped at the boat ramp to look at the water levels. The water was probably 6-8 feet lower than when Eva and I floated the river in June. 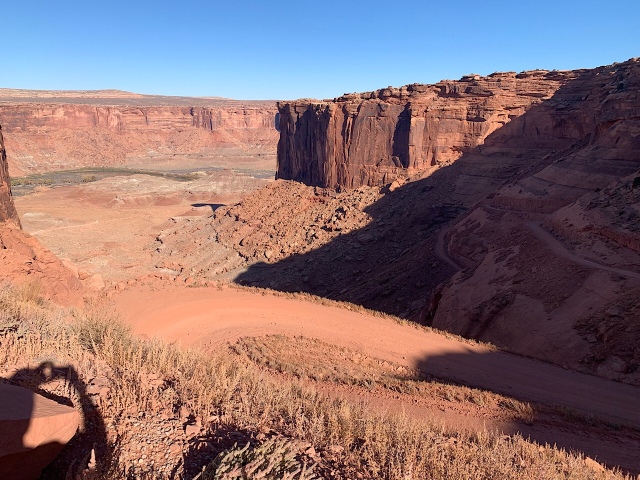 After the boat ramp we headed back to the switchbacks and drove to the top. From there it was ~17 miles of dirt road to the end. We aired up the tires and I headed for home.

The van did great. The trail was rough, so you could never go very fast for very long. I think we averaged 4-5 miles per hour over the entire trail (counting stops for pictures). The big climbs (Murphys and Hard Scrabble) were not that bad. I had good traction at all time and the van just crawled up the trail. My biggest concerns was someone coming down the opposite direction. I think the more challenging spots were the 6-10 foot drops or climbs that dispersed through out the trail. These became a challenge where there was an off-camber drop, followed by another boulder or hole or some other obstacle. I was never concerned about not making it through the trail, but I was afraid of hitting the back end of the van on rocks. But I made it through unscathed.

It was a fun trip and nice to have Terry along. I may go again to take Eva along for the trip.