Riviera Del Mar RV Campground is in the middle of Loreto, close to the downtown square and waterfront. It is also the center of stray dogs, cats and roosters. Around midnight each night the dogs start howling and fighting. We hear them all night long. Also, each night there are stray cats wandering through the campground crying and fighting. We are camped next to 3 guys in tents. One night, two cats must have been fighting for something in between the tents, they were quite loud. And then there are the roosters. They start crowing at 3:30 am. First one or two will start, and soon dozens of them are trying to out crow each other. This continues until after the sun comes up. But overall it is the cleanest and nicest campground we have been in. The showers are the best we have found in Mexico.

We walked down to the town square and a cruise ship had come into port that morning. The square was full of dancers and singers entertaining the crowds. We watched that for a while and then walked around the square and waterfront. There are a lot of nice hotels and condos along the waterfront. There are also vendors and shops to look at. We ate an empanada and ice cream for lunch. 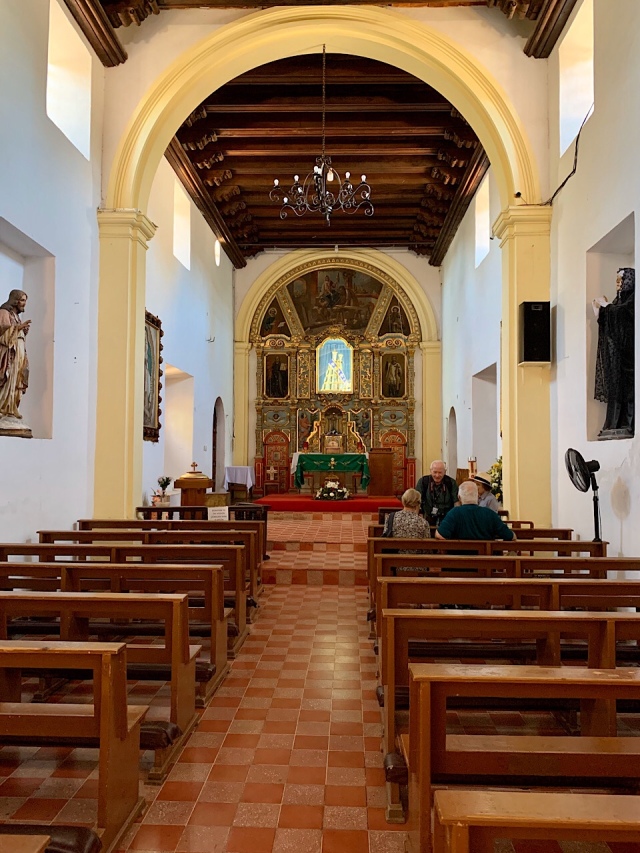 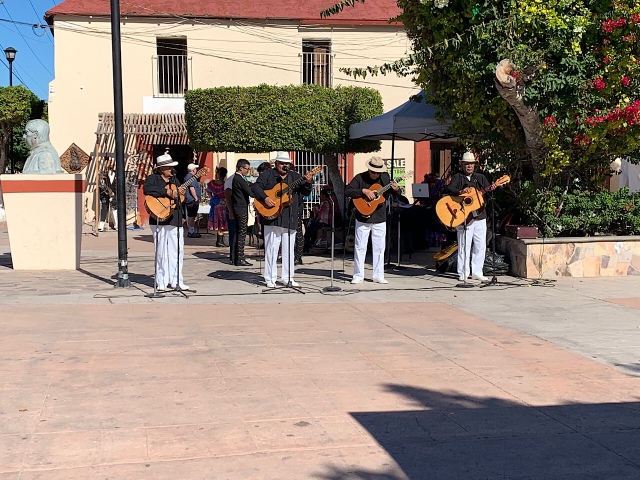 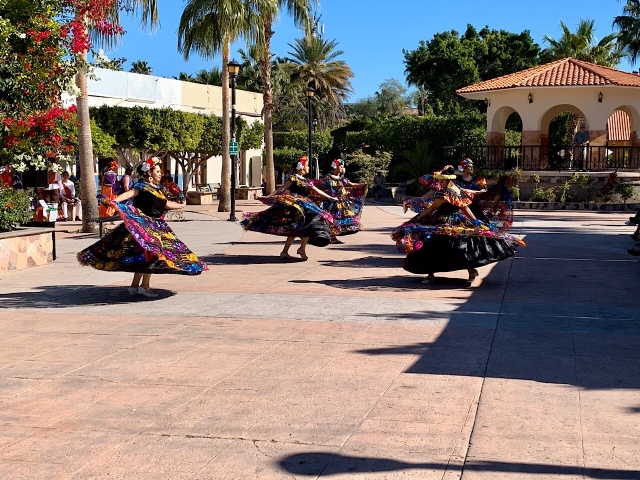 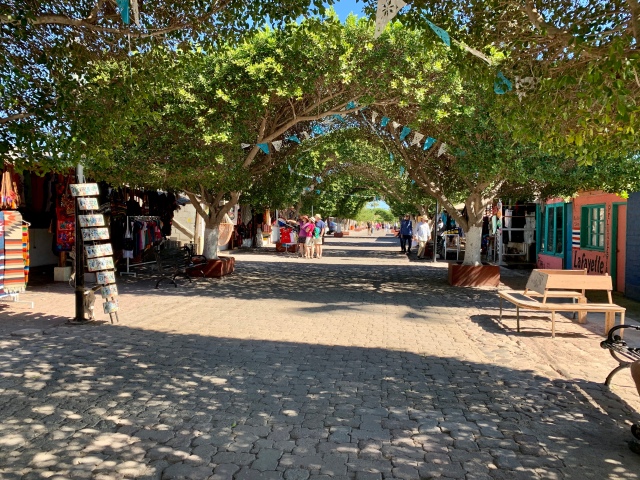 Later, after siesta, Eva and I walked 5-6 blocks to the grocery store. We went just to get milk, but came home with a bag full of food, including a watermelon. Later that night, the group had a potluck dinner. The campground had a nice pavilion next to our campsite with a BBQ. We had BBQ fish, chicken, rice, tortillas, guacamole and watermelon. There was plenty of food for everyone had plenty to eat. As usual, we went to bed early and read. 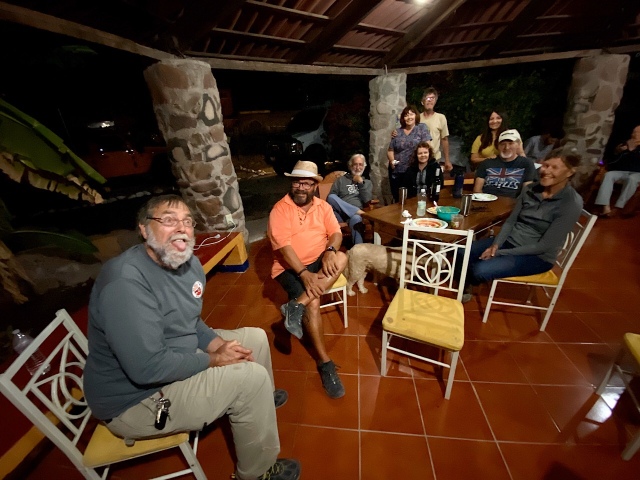 Today we drove about 25 miles from Loreto to the Mission at San Javier. It was a very nice road up a beautiful canyon to the top of the mountain. San Javier is a very small quiet town in an oasis of palm trees on the top of the mountain. The mission was founded in 1699 and the current temple was built in 1758. It is in very good condition and is in use today. The surrounding grounds were farmed and they had an olive orchard with trees that were over 300 years old. 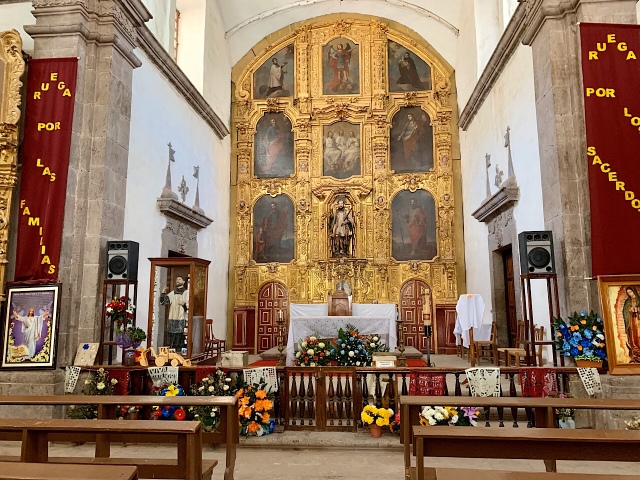 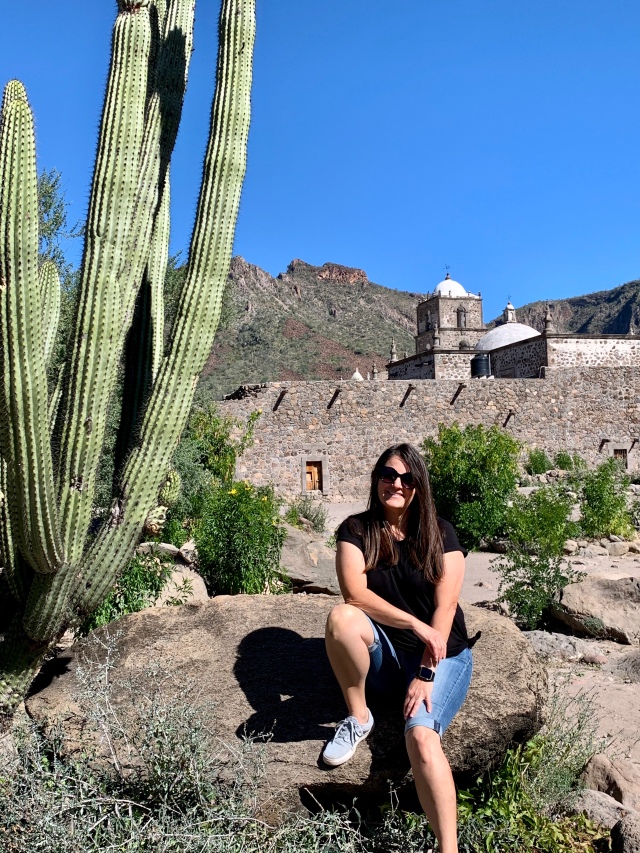 We bought some empanadas at the only small store that the town has. We also ate lunch at a restaurant near the mission. The town was so quiet and peaceful after spending the last few days in Loreto.

After lunch we drove down the canyon back to Loreto. In town we stopped at the car wash and they hand washed the van for $100 MX ($5.40 US). The van was pretty dirty after 3 weeks of dirt roads, rainstorms and sandy beaches. It is nice to have it cleaned.

Later that night we had another potluck with everyone in the pavilion. Eva made some Spanish rice. Tomorrow the group will separate as Jim and Gail will head north back to Canada while we will continue south down the Baja coast.