We packed up and left Loreto around 10 am and drove further south on highway 1. The roads in this part of Baja have been pretty good. I think they get a lot of money from tourism, so there is more government investment. There are a couple of very nice resorts and golf courses just south of Loreto.

The highway south climbs in and out of mountains and hills. It is a very pretty highway. Because of the rains earlier this month, the vegetation is full and green. The mountains have sharp peaks and exposed rocks that make them look like the mountains in Costa Rica. 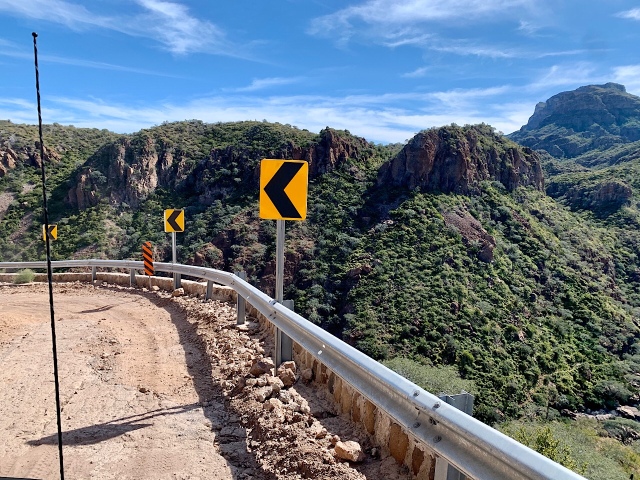 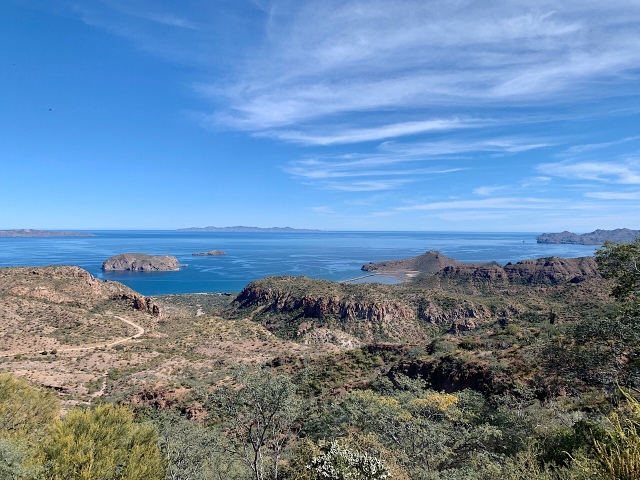 We stopped at Rattlesnake Beach to check it out, but we didn’t plan on staying, so we continued to Punta Agua Verde. This small town of maybe 40-50 occupied buildings, is at the end of a 20 mile dirt road. For the most part, the road is a nice gravel road, but there is a section of steep, narrow switchbacks that takes you from the mountains down to the beach. Fortunately we didn’t meet any other vehicles while we were descending from the mountains.

We found a nice camping spot on the north end of the beach that was protected from the wind. There was only one other camper, but they were on the south end off the beach. A few coves north of us was a small bay with 6 sailboats anchored. Eva and I walked along the cliffs to that bay and talked to the sailors. Most were from Canada, but there was a group from New Zealand. They invited us to a bonfire, but the path back to our camp us covered with water when the tide came in, so we thought we better get back. We had a quiet evening at camp. 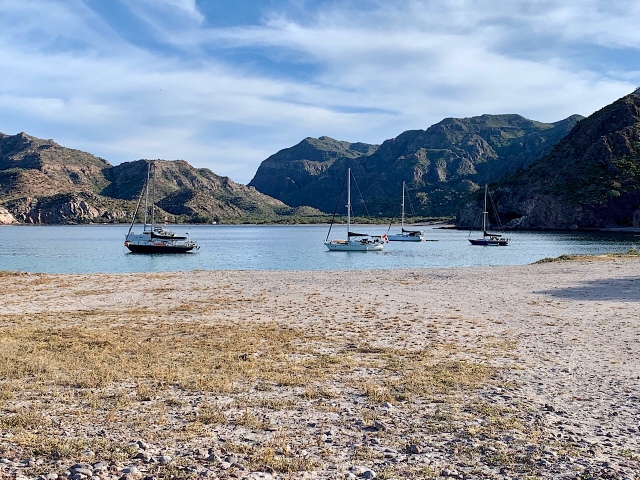 We call this pelican beach because there are 15-20 pelicans that fly and hunt for fish right in front of our camp. They are only 10-50 feet from shore. They were fishing the same area all night long and they are still there in the morning. They are fun to watch dive in and swallow the fish.

This morning we were up to see the sun rise over the bay. After breakfast I took the kayak and paddled to an rock named Roca Solidaria that was about 1.25 miles off shore. The rock was probably 100 ft high and was just out at the edge of the bay. It is used by sailors to mark to entrance to Agua Verde Bay. There was no wind so it was an easy paddle. However, at the rock there was wind and waves, so it was difficult to get on shore, but I was able to beach the kayak and walked around the small island that the rock was on. On the way back to camp I was able to use the new downwind sail that Sea Eagle sent me. The wind wasn’t real strong, but I was able to sail almost all the way back to shore. The last 100 yards I had to paddle because the wind was parallel to the shore. The sail worked well, but I wish the wind was a bit stronger.

Before lunch the group hiked about a mile along the shore to the small bay where the sailboats were anchored. Eva and I continued around the bay to a point on the shore where all the pelicans nested.

After a PB&J sandwich for lunch, Eva and I walked into the village of Agua Verde. It is a stretch to call it a village, it is more of a collections of houses and buildings. We wanted to spend some money with the locals, so we went looking for a store to get some groceries. They told us there were three stores. We found one after a lady told us to walk up this path and the store has a black truck parked outside. After wandering between houses, we found the store. It was about 12’ x 12’ and also served as the owners house. Two walls of the house had a bed, crib and dresser. The other two walls had shelved for food and other items. There was just enough room in the middle for us to stand and look at the food. The owner had just started the store, but was looking to add on to his house so the store wouldn’t be in their house. He had a 12 year old son and a 9 month old girl.

There was a good selection of food and the fruit and vegetables looked real good. We bought 2 bananas, 2 tomatoes, 2 avocados, 4 eggs and 2 small cookie packs for 72 peso ($3.84 usd). He told us the eggs were fresh from his mom. We were surprised at the selection and the price. We walked around town a bit more and then back to the beach.

We had a fun time watching 3 of the sailors launch their dinghy from the beach. The surf had gotten a bit rough since when they landed and their dinghy was a small, short, flat-fronted rowboat. With three of them, it was overloaded so their first try the boat was swamped in about the first 25 yards. They had to jump out and pull the boat back to shore. The second try was almost the same, but then one guy jumped out of the boat. With a smaller load they were able to get out away from shore and motor to the sailboat. The other guy had to walk back along the shore. But first he was diving and searching for their stuff they lost on the first attempt. We found out they had lost an oar lock. He came back later to search, but could not find it.

On the way back to camp we stopped at the restaurant to order dinner. They only serve dinner by reservation. Otherwise they don’t open for the evening. We had tacos and tamales. It took several hours to make the tamales and they didn’t finish until after they closed for the evening, so he delivered our food to our camp, about 200 yards down the beach. We ate dinner around the campfire.