We had a plan to go see the whales and their calves in the bay just west of San Ignacio. The campground owner would drive us the 90 miles in his van, and then another company would take us out in boats. But it was a soft rain when we woke up, and around 8 am Manuel, the campground owner, said he called the bay and it didn’t appear that the whales were out this morning, so we decided to wait and see the whales on the way back. It is more likely to see the whales later in January or early February. 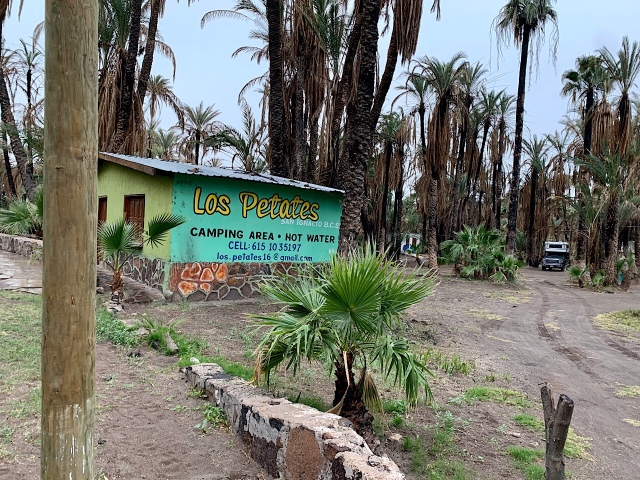 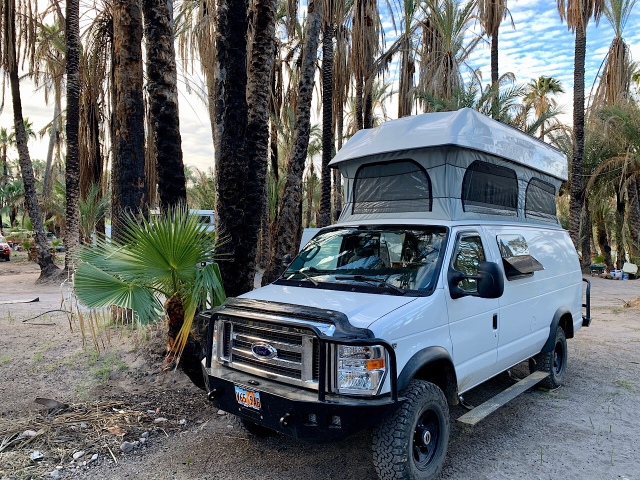 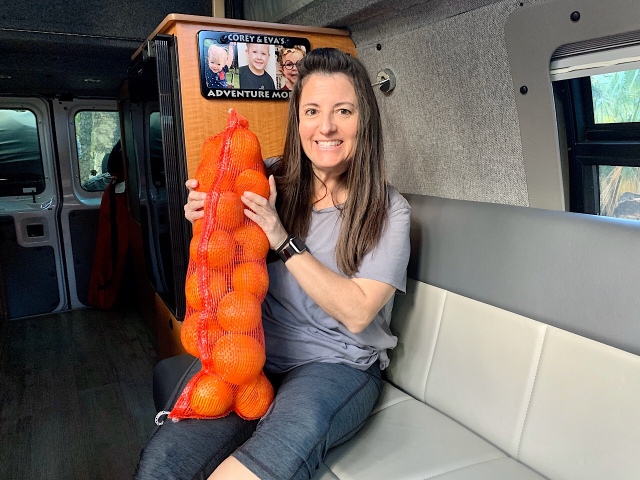 After packing up we drove into town to see the Catholic mission and town square. The mission was finished in 1786. Most of the group ate breakfast in a restaurant, but Eva and I had already had breakfast. So we walked around the town square. Eva also talked to her sister and dad. 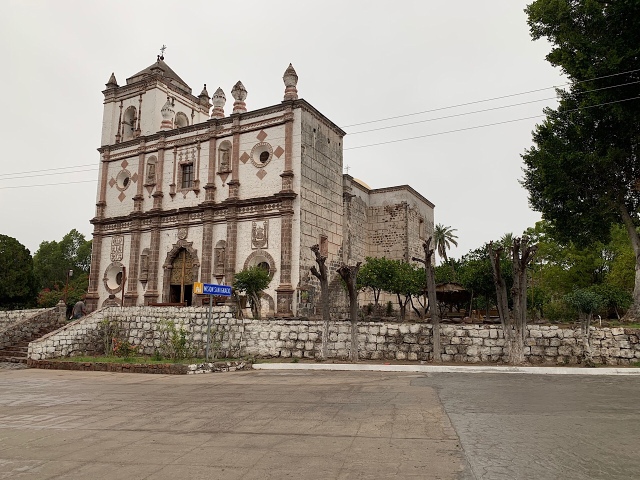 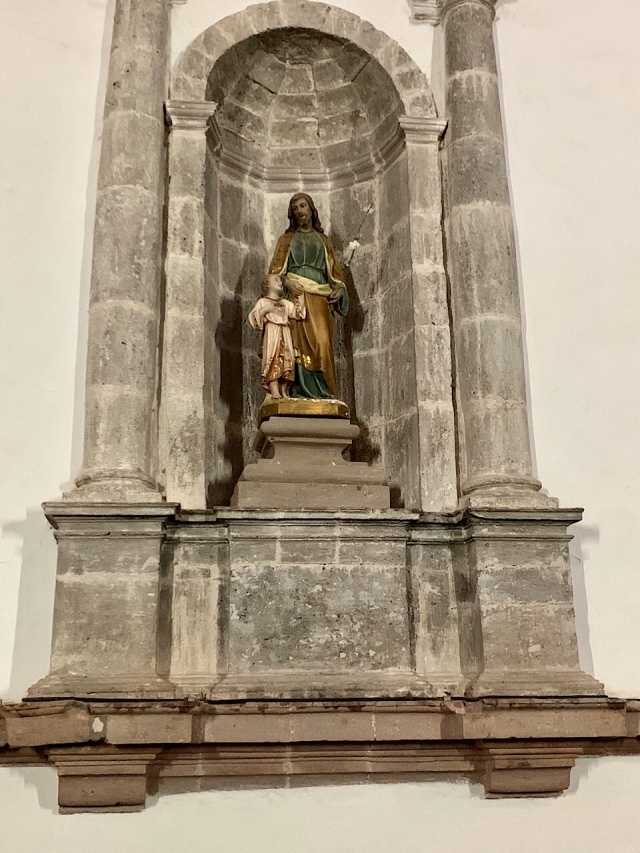 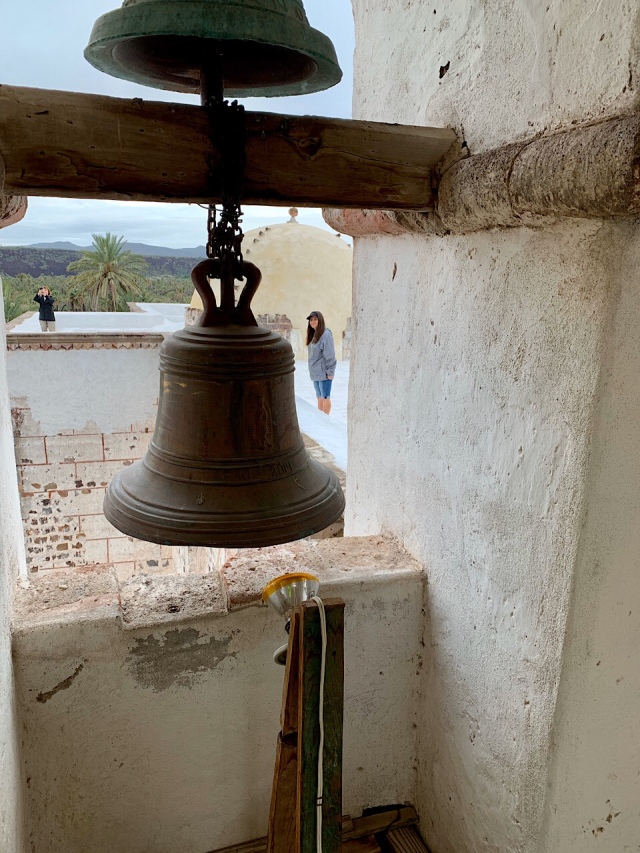 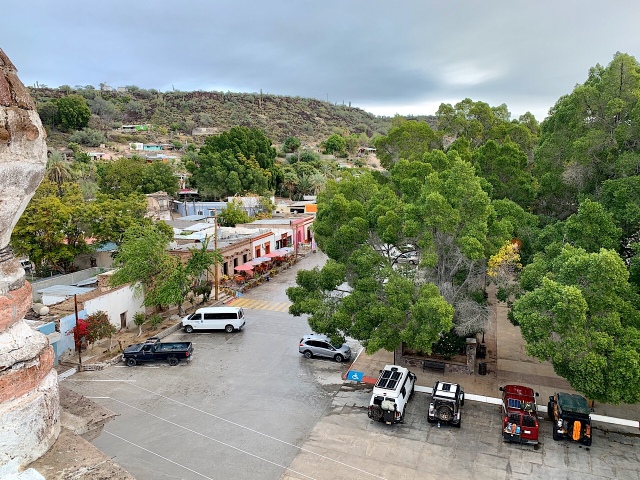 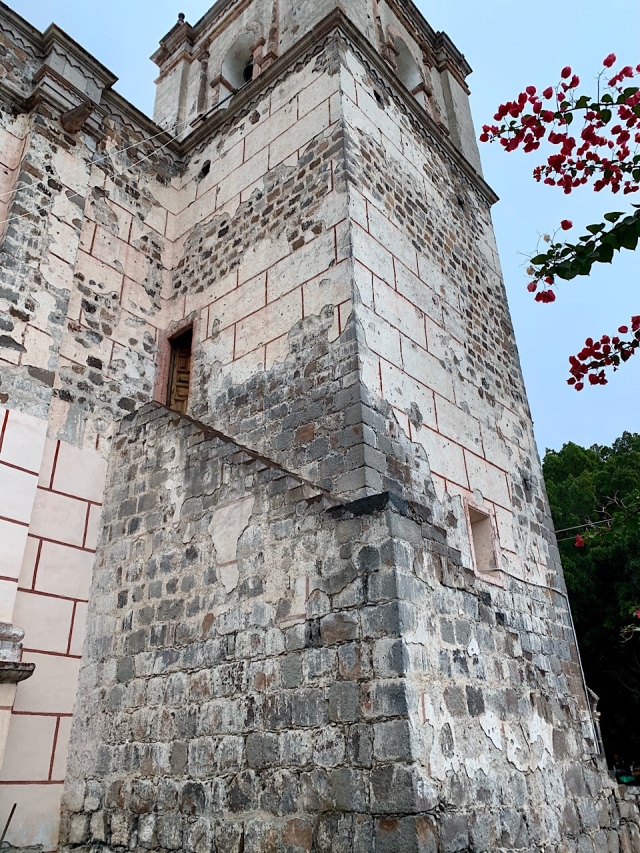 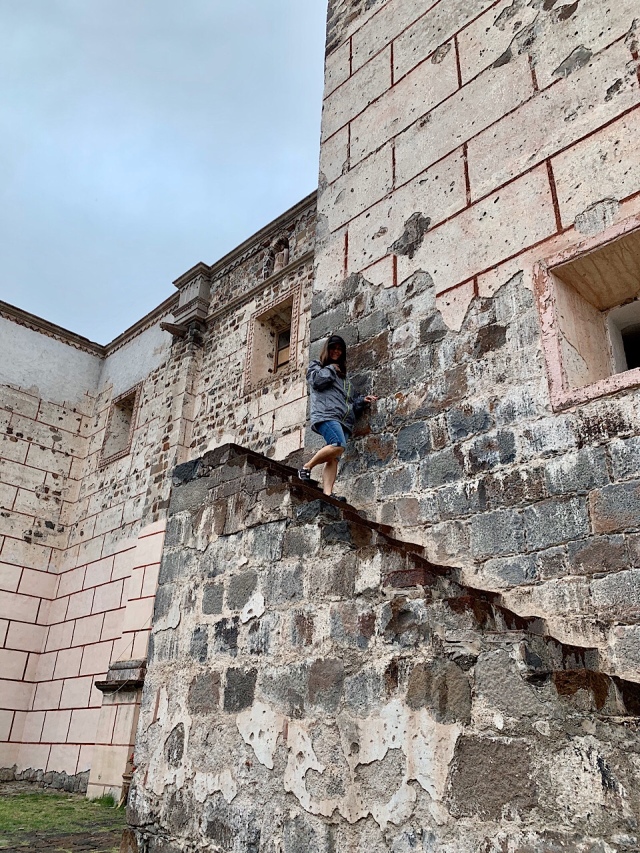 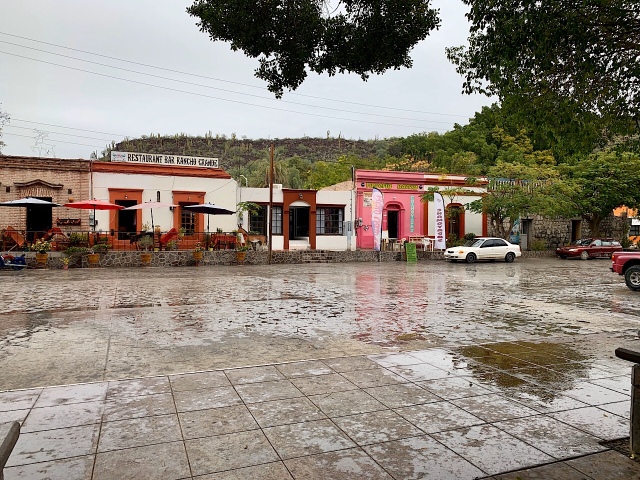 From San Ignacio we drove to the east coast of Baja and drove along the Sea of Cortez. We stopped in the town of San Rosalia to look at the ruins of a copper smelting plant and everyone went to the bathroom. We also drove through the town, but it was so small and crowded we did not find a place to park. 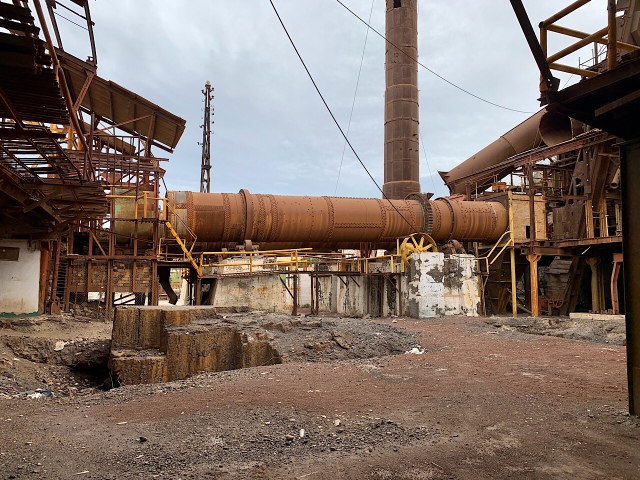 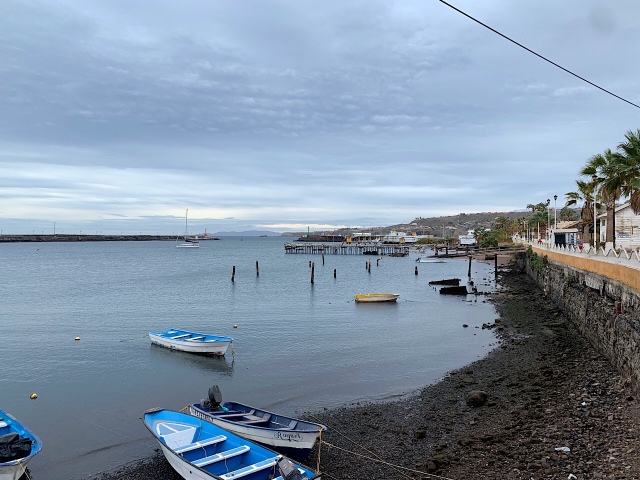 We continued down highway 1 to Mulegé. The town has a large arch entrance to the old part of town. We parked outside the entrance and walked into a small grocery store. They didn’t have anything we needed, so while the others shopped, we drove to another part of town and bought some water, and filled our tanks with 10 gallons for $280 pesos ($1.60 USD). 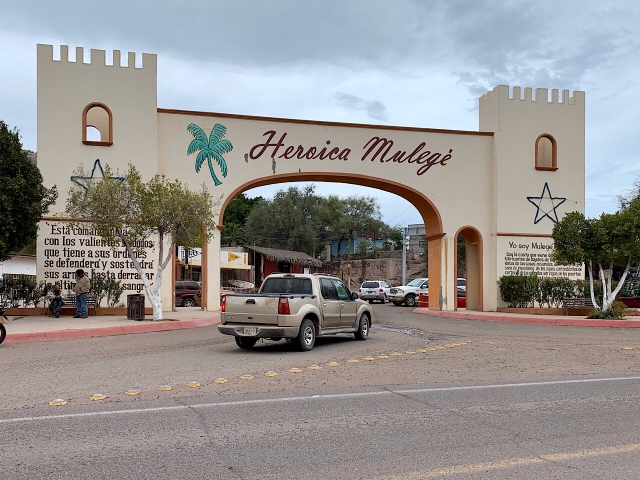 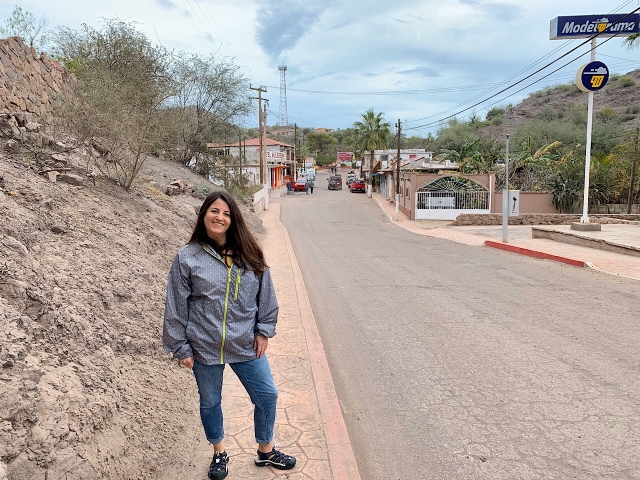 By the time we left Mulegé it was about 3 pm. Our campsite that night was on the south end of Bahia Concepcion. Concepcion is a huge bay that starts near Mulegé and is about 10 miles wide and 30 miles long. There were several beautiful commercial campgrounds just off the road, but they were all pretty crowded. We continued around the south end of the bay and found a deserted beach where we set up camp. Later, after it was dark, the beach lit up with the luminescence algae. With every wave a blue light flashed along the shore where the water hit the sand. We also through handfuls of small rocks into the water and it was like neon blue fireworks in the surface of the water. It was pretty cool to see, but we could not get a picture to take as it was too dark. We ended the night with our usual campfire. 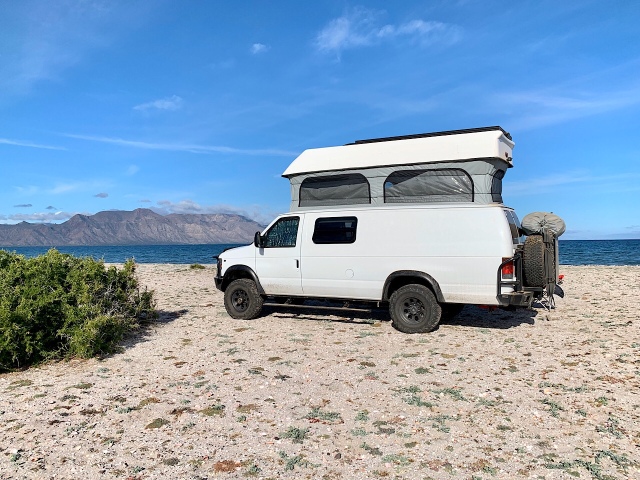 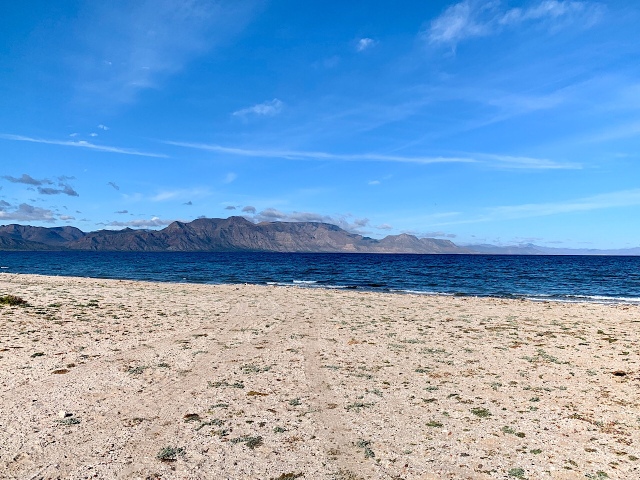 Today we stayed on the south shore of Bahia Concepcion. It was sunny all day, but there was a stiff wind off the bay. The wind was strong enough that we didn’t take out the kayaks. So we just hung around camp and read and talked. A few of us shared some food for a light lunch for the group. The winds were strong all day, so later we all decided to move the next morning. We hope to find a better place on the bay that would not be so windy.